How important is construction to economic growth and employment across Canada?: Part 2

Posted on April 17, 2011 by financialinsights

If you haven’t read that post, make sure you do as it also explains how falling house prices tend to dampen demand for housing, a strange and seemingly counter-intuitive phenomenon.  The reality is that both of the metrics we’ve examined are well above their long-term trend lines in all provinces examined in part 1.  The implication is that if there is a significant correction in house prices, history tells us that housing starts fall and construction employment comes under pressure.  In the absence of significant government stimulus measures like infrastructure projects, GDP and employment face some headwinds on this basis alone.

By these measures, the economies of provinces from Ontario west are at risk of facing economic headwinds in the increasingly likely event of a housing correction.  What is not measurable however, is the level to which consumers might retrench and slow their spending amid a housing correction.  The housing wealth effect is a well-studied phenomenon.  The rapid expansion in home equity withdrawals via HELOCs (the fastest growing form of consumer debt) would certainly come under pressure.  The economic impact of a significant housing correction would be much broader and more significant that the two measures we’re examining in this series.

With all that said, let’s have a look at all provinces from Quebec east to Newfoundland. 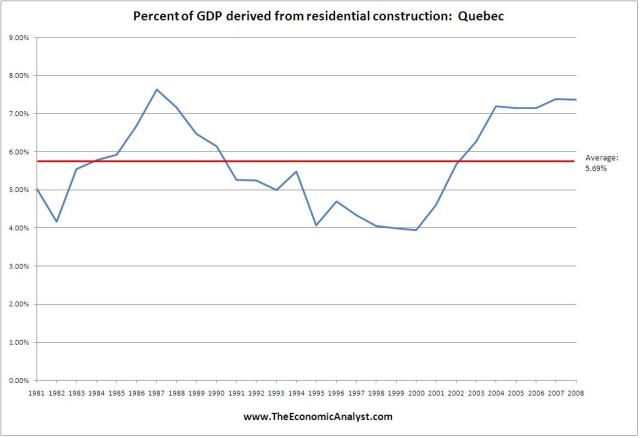 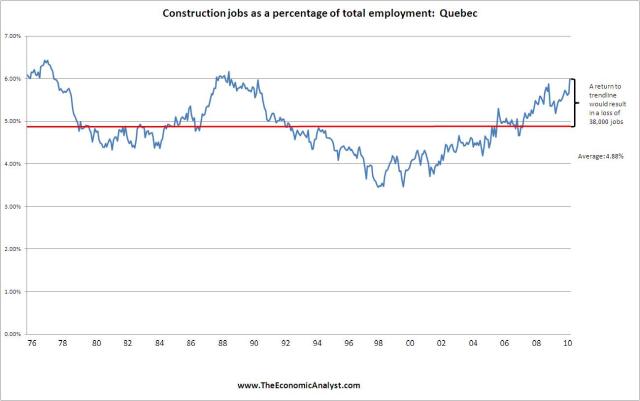 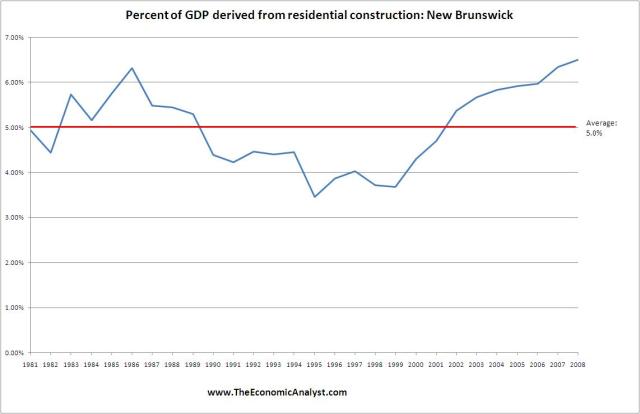 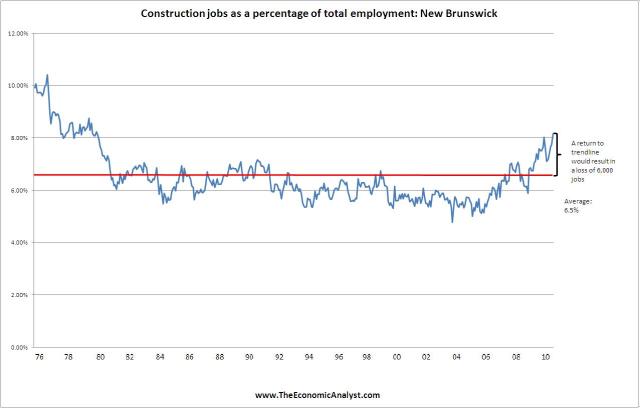 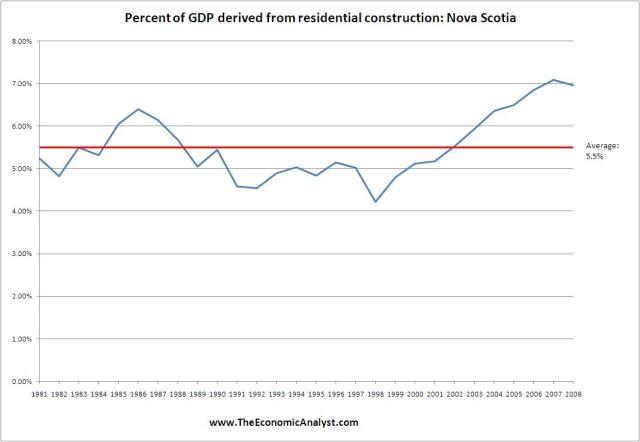 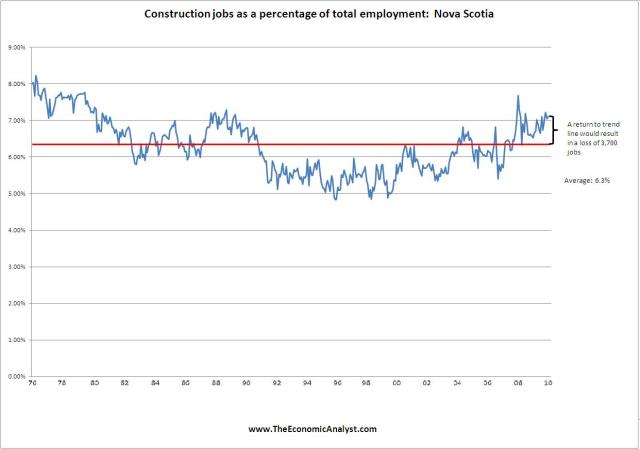 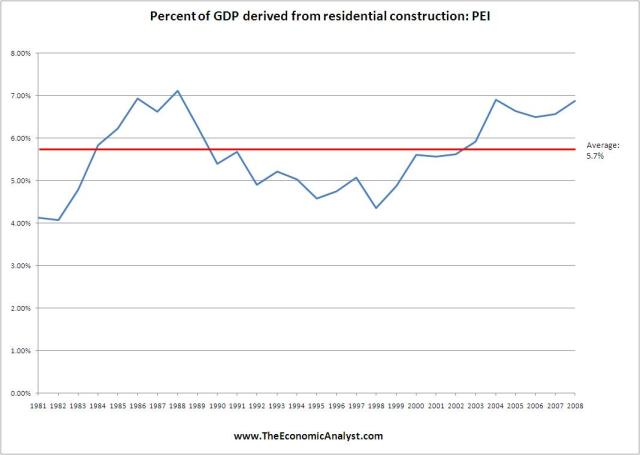 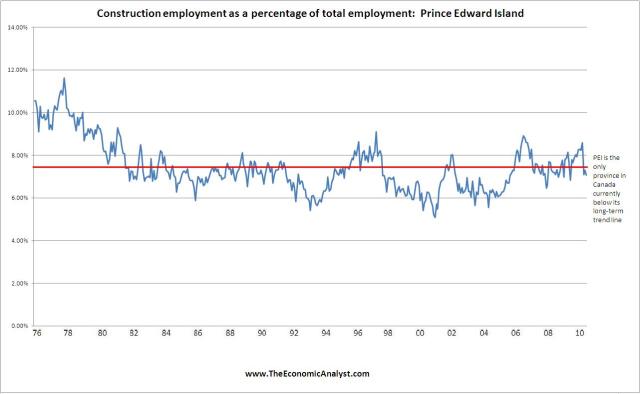 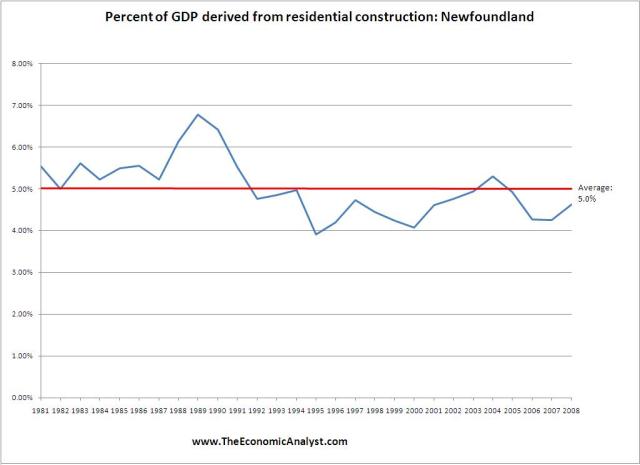 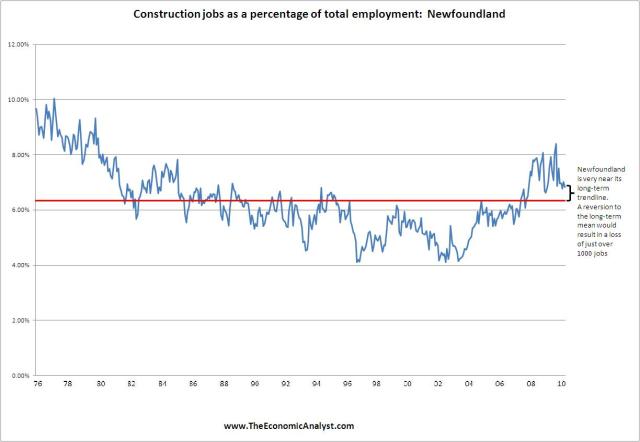 As was the case when we compared the growth in provincial per capita GDP and house prices (part 1 and part 2), it appears that the further east one travels, the less risk is posed by widespread housing correction.  Certainly Quebec seems quite vulnerable as does New Brunswick and Nova Scotia, but it bears remembering how far their house prices have strayed from underlying fundamentals in discussing any economic risks posed by a realignment in house prices.  In the case of Nova Scotia and New Brunswick, only a mild overvaluation existed suggesting that the risk of a significant house price correction is more muted in these provinces than some of their bubblier neighbours.  I wasn’t able to obtain Quebec resale data and was unable to show how far (if at all) their house prices had strayed from the underlying growth in their economy.  I since have obtained the data, but I’m trying to understand how to use it for long-term comparisons as they changed the way they report their numbers in 2002, making comparisons between periods difficult.  I’ll see what I can do there.

6 Responses to How important is construction to economic growth and employment across Canada?: Part 2